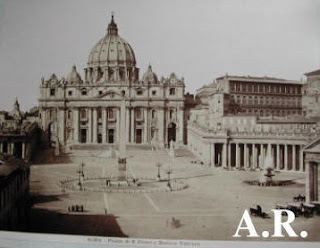 The albums of cities, as a souvenir, where beginning to be made by the photography studios that started to became popular in the late XIX century.

Rome became a favourite destiny for the first rich tourist, (commonly from England) that spend a year out of their country to discover a new country.

Because it was rare to have a personal photographic camere, and the technique of non-professionals very poor, these kind of albums became the -luxury- souvenir for a country or city that had just been visited.

The most important monuments were in these albums, as in this case Saint Peter's Basilica.
The common format of the albums where 14x10 cm or 20x36 cm (like in this case), with a luxury binding and cover.