Roger Fenton's Photographs of the Crimea

This is the first exhibition to focus exclusively on Roger Fenton's pioneering photographs of the Crimean War, taken in 1855. Fenton was already an accomplished and respected photographer when he was sent by the publishers Agnew's to photograph a war that pitched Britain, France and Turkey as allies against Russia.  Arriving several months after the major battles were fought in 1854, Fenton focused on creating moving portraits of the troops, as well as capturing the stark, empty battlefields on which so many lost their lives. 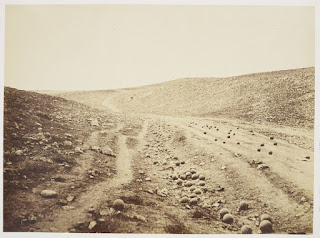 This iconic image of war was photographed by Fenton in April 1855. The ravine, named by British soldiers using a phrase from the 23rd Psalm, shows the desolate landscape in which the battles of the Crimean War were fought. The photograph was difficult to set up, and Fenton later wrote that ‘it was plain that the line of fire was upon the very spot I had chosen’. Fenton was forced to move 100 yards from his chosen spot to avoid the cannon fire, but ‘after this no more came near, though plenty passed on each side’. 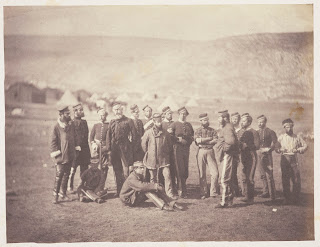 Colonel Doherty and the Officers of the 13th Light Dragoons 1855


Photograph of a group of Officers and men from the 13th Light Dragoons, including Colonel Doherty. They stand in a variety of positions with two men sitting on the ground to the left. All are wearing military uniform and hats and some wear coats. Behind them is a campsite and a hillside.