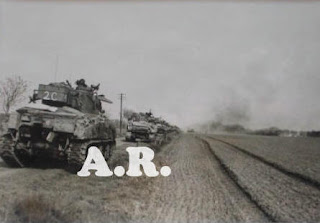 As it was announced on April 6th that British Armour moving up North and East from Quaken Bruck , broken out of th Bridgeheaf across the River Alley.
British infantry was whithin 2 and 3 miles of Breme
Picture shows Tanks of the Coldstream Guards firing into woods where the enemy are still holding out.
en 10:19