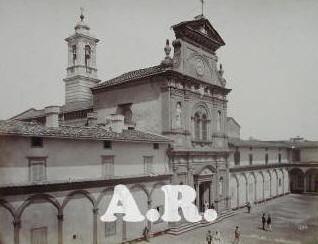 The Certosa del Galluzzo is on top of a hill in the South of Florence (Italy). It was one of the most important monasteries of Europe, keeping many drawings in its walls until Napoleon took everything in the XIX century. It also has an important library.

In this image we can see the main part of the Certosa: the church of San Lorenzo. This magnificent image is from the Alinari’s first period of work as it is signed with a blindstamp in the lower right corner. After contacting the curator of Alinari Museum, Andrea del Polo, he confirmed the date for this vintage photo in 1855. Nowadays we know that Alinari brothers’ studio was one of the most important those years, and currently, the Alinari Museum is one of the most important photography museums of the world because of the size of its funds.

The photographer stands on a high place so he can include in the picture the church and part of the yard of the monastery. The standard vintage picture for those ages would have been to stand in the yard in front of the church and shoot the photo.

We can see in the picture several people including two monks, one in the yard and another one in steps of the entrance. If we have a closer look to the image we will find that people was posing for the picture (because of the necessary exposition time of the cameras). There we can see two men in the middle of the yard shaking hands and looking at the camera, as well as the man in the steps of the church who is giving alms and also looking to the camera.

This vintage photo is in perfect conditions and was bought in Prague.