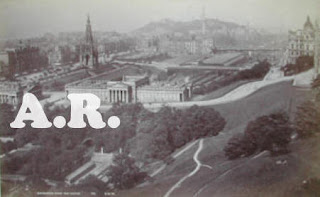 View of the city of Edinburgh from the castle. In the center of the photo we can see the "Scott Monument" in Princess St.
This is one of the many views that the photographer Georges Wilson took the city of Edinburgh, part of which he collected throughout Scotland.
In the present case this is part of a photo album entitled "Scottish Scenery" bought from a shop in Madrid.
The Wilson's cityscapes were sold worldwide since it was one of the most important studies in England in mid-nineteenth century.Wilson photographied not only the UK but also Spain, South Africa.

..................With a similar entrepreneurial spirit, in a bid to extend his initial portraits into the realm of greater production, Wilson had a stroke of marketing genius. In 1857 he created a montage of one-hundred and one of Aberdeen’s established middle class, identifying the who’s who of Aberdeen society, and simultaneously drawing attention to himself, to his clients and their elevated status. It sold extremely well, and in a single stroke this new promotion publicly cemented his relationship with existing clients while using their patronage and image as advertising, thus compelling other members of society, wishing for similar recognition, to visit his studio in the hopes of being included in the next year’s edition...........

The George Washington Wilson and Co. Photographic Collection
The George Washington Wilson and Co. photographic collection consists of over 37,000 glass plate negatives, produced by the Aberdeen firm between the second half of the nineteenth century and the early twentieth century
His patronage by the Royal Family during their visits to the Balmoral Estates began in 1854 when he was invited to take photographs of the Royal family in the grounds of Balmoral
He received the official appointment of Photographer Royal for Scotland in 1860 and his relationship with the Royal family continued throughout his career
George Washington Wilson exhibited his photos in these early exhibitions:
-  1855:  British Association, Glasgow
-  1856:  Edinburgh Photographic Society
-  1857:  Art Treasures, Manchester
-  1858:  Edinburgh Photographic Society
-  1859:  British Association, Glasgow
-  1859:  Glasgow Photographic Society
-  1861:  London Photographic Society
-  1862:  London International Exhibition
Wilson went on to build up a substantial business as a publisher of topographic views, principally of Scotland, where he travelled to Braemar, the Trossachs, the Falls of Clyde and many of the wilder parts of Scotland. His English output is small compared with his Scottish views, but Wilson made several journeys into England.
Born 7 February 1823; died 9 March 1893.
By 1880 he had established the largest publishing company of topographical views in Britain called "G.W. Wilson & Co.".