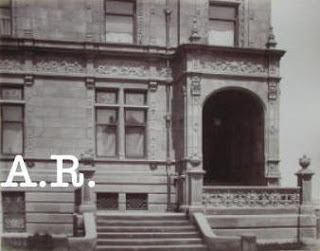 Oliver Ames was a member of the powerful family Ames. He was the politician who commissioned H. H. Richardson City Hall building in North Easton.
The photo shows us a detail of the facade as it was in 1882, his mansion in Boston.
Carl Fehmer, architect of the mansion, was a famous Boston architect of the time (Telephone Building, Shuman Corner). There are still today many of his works in this city.
The photo is an albumen on cardboard 22x24 cm. exceptionally preserved.

It belongs to an album entitled "L'Architecture Americaine" published by André, Daly, Fils & Cie in Paris in 1886.

Albert Levy was a famous French photographer who had open studios in New York and Paris in 1880's. He was the author of "Albert Levy's Photographic Series of Modern American Architecture".

These series are 663 photographs with a compendium of the best American architecture of the period. Collect a selection of the work of the best architects in cities like Boston, Chicago and New York.