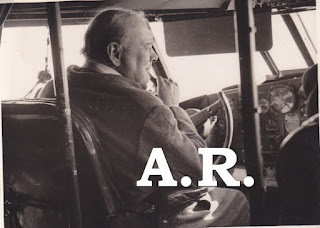 Prime minister returns by air
Photograph taken when the Prime Minister Mr. Winston Churchill flew fron the USA to Bermuda at the conclusion of his visit and the just prior to his trans atlantic flight to Great Britain.The crossing was made in the Boeing 314 blying boat Berwick piloted by Commander Kelyy Rogers. OBE, one of the seniro pilote of British Overseas Airways Corporation
The Prime Minister seen at the controls of the flying boat

IWM currently holds nearly 11 million photographs, covering all aspects of modern conflict from the Crimean War to the present day. It is a vital source for those interested in the history of war photography as well as the history of the era.
Our Photograph Archive includes work by photographers of all nationalities and backgrounds. It is the national custodian for photographs taken by the Armed Forces as well as other government departments such as the former Ministry of Information. It also holds substantial collections of work by amateur and professional photographers. The photographs themselves are supplemented by original documents, books, and photographic equipment which help us understand how and why these photographs were taken.
The Archive continues to acquire material through official military photographers as well as working with leading contemporary photographers such as Donovan Wyllie and Ed Clark.

From Wikipedia, the free encyclopedia
British official war artists were a select group of artists who were employed on contract, or commissioned to produce specific works during the First World War, the Second World War and select military actions in the post-war period.[1] Official war artists have been appointed by governments for information or propaganda purposes and to record events on the battlefield;[2] but there are many other types of war artist.
A war artist will have depicted some aspect of war through art; this might be a pictorial record or it might commemorate how war shapes lives.[3] A war artist creates a visual account of war by showing its impact as men and women are shown waiting, preparing, fighting, suffering and celebrating.[4]