The Illinois State Capitol, located in Springfield, Illinois, is the building that houses the executive and legislative branches of the government of the U.S. state of Illinois. The current structure is the sixth to serve as capitol since Illinois became a part of the United States in 1818. The capitol is in the architectural style of the French Renaissance and was designed by Cochrane and Garnsey, an architecture and design firm based in Chicago. Ground was first broken for the new capitol on March 11, 1869, and it was completed twenty years later for a total cost of $4,500,000.

WORK COMMENCED AT THE STATEHOUSE GROUNDS. -
Yesterday afternoon about three o'clock, quite a concourse of people assembled at the State House site, to witness operation of breaking ground preparatory to excavating trenches for the foundation of the new State House.  At the hour mentioned above, J. Bunn, Esq., chairman of the Board of State House Commissioners, took hold of the plow, and turned a furrow on the line of the foundation for about half the distance.  Hon. J. W. Smith then took the plow and completed the circuit.  The two commissioners then took a spade and removed a small quantity of earth, and the work was turned over to the contractors.  No speeches were made on the occasion and the whole operation was performed in a sensible and business-like manner.  Should the weather permit, a large force will commence the work of excavating today.

The Illinois capitol is the tallest non-skyscraper capitol, even exceeding the height of the United States Capitol in Washington, DC. The building itself is shaped like a Latin cross aligned to the major points of the compass.
The current building is the sixth capitol to serve the state since its entry into the United States in 1818.The capitol dome is plated in zinc to provide a silver facade which does not weather. The interior of the dome features a plaster frieze painted to resemble bronze, which illustrates points in Illinois history, and stained glass windows.

Lincoln
It was in this building that Lincoln served his final term as a state lawmaker in 1840–41. It was here, as a lawyer, that he pleaded cases before the state supreme court in 1841–60. It was here, in the Illinois House chamber, that he made his House Divided speech in June 1858, announcing his candidacy for the U.S. Senate. It was to the same chamber, in May 1865, that his body was returned, arriving from Washington, D.C. prior to final burial in Springfield's Oak Ridge Cemetery. 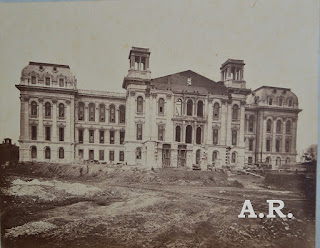 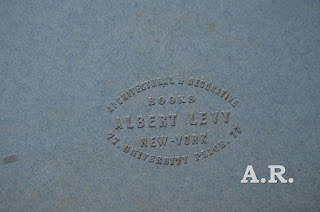 Albert Levy's Photographic Series of Modern American Architecture. Due to these series, Albert Levy is referenced as counterpart for Alinari in the United States (13).